With culinary talents sharpened by extensive experience working in a number of kitchens around Mexico, Chef Gerardo Garcia Martinez was hired by the luxurious Villa del Palmar resort at the Islands of Loréto as its acclaimed sous chef. He’s the perfect man for the role because aside from his outstanding culinary skills, he has a friendly personality and a great attitude that benefits resort’s mission to extend world class services to all its visitors. Chef Gerardo’s passion for cooking and his perfectionist trait for attaining the best taste from his dishes have made the Villa del Palmar at the Islands of Loreto a sought after place for matchless gastronomical experience. 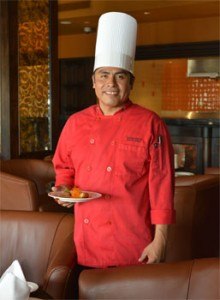 He first began working professionally as a cold table chef at Casa de Campo, a famous hotel and restaurant in Mexico city. Indeed, Mexico City has become a stage for gourmet Mexican cuisine in the last few years, and in the process has produced the country’s most respected culinary masters, including of course chef Gerardo Garcia Martinez. He found himself working with the most famous masters of the kitchen with the likes of Vicente Etchegaray, Thierry Dufour and Olivier Lombart. Chef Gerardo claims he learned a lot from them, and that they were instrumental in the cooking style he possesses today.

His cooking approach is a mixture of both the traditional and modern techniques you would expect to find in a fine dining kitchen, coming up with dishes that delight both traditional and cosmopolitan tastes. Before becoming a sous chef at Villa del Palmar Loréto, he worked with the very finest kitchens of the region with positions held like Executive Chef, Kitchen manager and kitchen supervisor. These experiences were very beneficial in the development of a culinary style uniquely his own. His cooking style and techniques are very effective, and have been highly praised by those looking for truly authentic Mexican cuisine. Chef Gerardo has perfected his craft, and his outputs are enjoyed by the enthusiastic and satisfied gourmet seekers at the Villa del Palmar resort in Loreto.

The arrival of Chef Gerardo Garcia Martinez to the Villa del Palmar Islands of Loreto benefits everyone because Mexican tastes and flavors have never been this good. It’s such a pleasure to experience gastronomical contentment at this famed Mexican destination.